“The man who killed Joe Torres / Never went to jail / The sniper who picked off Carl Hampton / Never paid any bail / The killers of Milton Glover / They might be pulling you over tonight / And if you happen to get shot / Well I guess you started the fight.”   — The Badge Means You Suck, AK-47 (1980)

“The Badge Means You Suck” is arguably one of the best protest punk songs against police brutality, and it originated in Houston.

AK-47 were an integral part of the musico-political affront taking place during Houston’s first wave. Formed the same year it debuted at the Rock Against Racism show at Paradise Island in 1979, the band released its polemic debut single The Badge Means You Suck/Kiss My Machine in 1980, which condemned the Houston Police Department (HPD) as racist and trigger-happy in spite of an antithetical department slogan at the time — The Badge Means You Care.

The Badge holds its own among other punk protest anthems such as Black Flag’s “Police Story” and “Hate the Police?” by Austin’s The Dicks. While AK-47 is considered a seminal punk band in late ’70s Houston, a hard driving sound influenced by Hawkwind and the previous era’s prog rock, long hair, and visual art showed some continuity between first wave punk and the psychedelic movement that preceded it. The iconic cover art by Jimmy Bryan is representative of this earlier generation.

The single’s front sleeve lists nine victims slain by HPD around the time, memorializing their names so they would not be lost to time. In the image’s background police wear full riot gear, and the HPD crest is displayed. The flipside cover for “Kiss my Machine” is a collage, which Jimmy coined “Machine Mandala.”

“I was the only hippie in the band,” he told Wild Dog Archives. “The point with my artwork was to inject the same imagery that fed much of the protest during the Sixties.” At several AK-47 performances, Jimmy — the band’s “art director” — would appear on stage wearing his own gas mask. Swaying to the rhythm, he controlled a “light show” of sorts that featured black and white transparencies (which he developed) displaying similar stark images.

“I wanted punks to understand that this movement, this music, was connected to the ’50s/’60s counterculture. Punk was not dissimilar; it was a continuum,” he said.

Whether you consider them hippies or punks, AK-47 had an impact on the early Houston punk scene, and “The Badge Means You Suck” lives on in protest of police brutality. 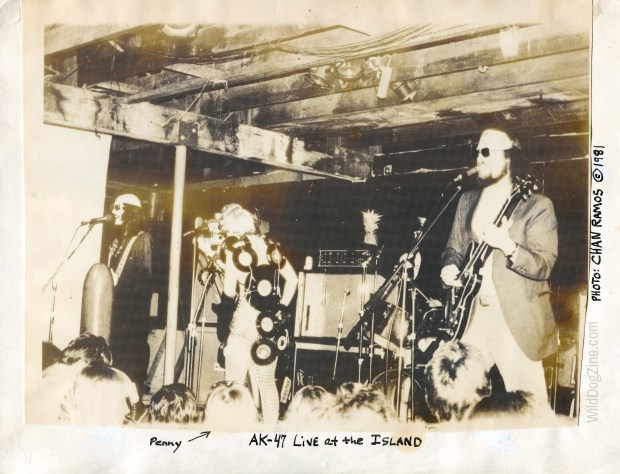