Henry “Wild Dog” Weissborn’s punk record collection was legendary. After his untimely passing, these artifacts were among the first to go — some dispersed among local collectors whose record shops displayed scarce and signed copies “from the personal collection of,” and others purchased by online auction enthusiasts.

Wild Dog Archives recently spoke to a record store owner in town about his high-dollar sale of the Necros four-song EP Sex Drive — the band’s 1981 debut and the first Touch and Go Records release — a choice pick from Henry’s collection proving its weight in the collector’s market. While this scarce record is no longer among the artifacts that comprise Wild Dog Archives, original letters from band members, including Necros vocalist Barry Henssler, leave an indelible mark about Henry Wild Dog’s status as both ally and unofficial ambassador of Houston’s early scene.

In September 1981, Henssler sent Wild Dog several Necros flyers, including one with a hand scrawled letter on the back discussing his view on MDC/Stains and The Dicks (before garnering fame outside of Austin), The Hates, keeping shows close to home or touring the West Coast (though he says the band was not widely known there), his own zine, SMEGMA JOURNAL (out of hometown Maumee, Ohio), and sending a copy of the new Necros EP.

“We send in the tape tomorrow,” Henssler wrote. “Don’t worry you’ll get one.” 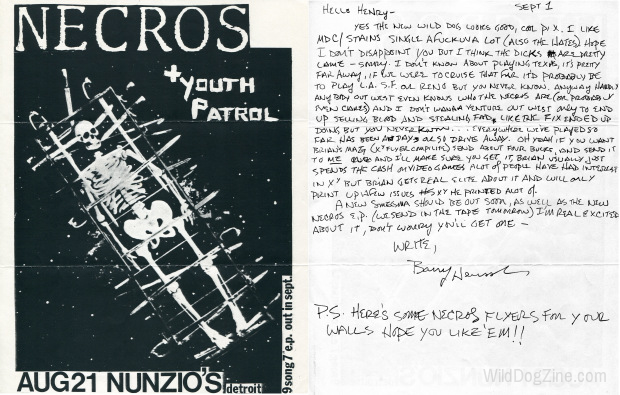