Led by a sociology student named Henry Weissborn, the three-member strong Direct Action Committee (DAC) at the University of Houston began organizing “Be-In” events in the spirit of the previous decade’s counterculture. Also know by the Youth International Party’s moniker “Yippies,” Weissborn, brothers Jeff and Dave Stewart and their fellow activist party banded together with some of Houston’s earliest punk bands to produce these underground music gigs.

There is cut-and-paste evidence that legendary Houston punk progenitors Really Red and Legionaire’s Disease performed at Yippie-organized Be-Ins, including an outdoor event held November 18, 1978, at Lynn Eusan Park, which drew a massive crowd of around 500 supporters, according to a report in Weissborn’s first DIY publication, ULTRA magazine.

Houston’s student Yippie chapter planned to launch the city’s first Rock Against Racism event on campus as documented on this flyer promoting ULTRA, but the “free rock and reggae” campus event was called off. The show took place instead at Paradise Island on April 1, 1979. Among some of the classic punk bands performing for the first time were AK-47 and Vast Majority, two of Houston’s most radical. 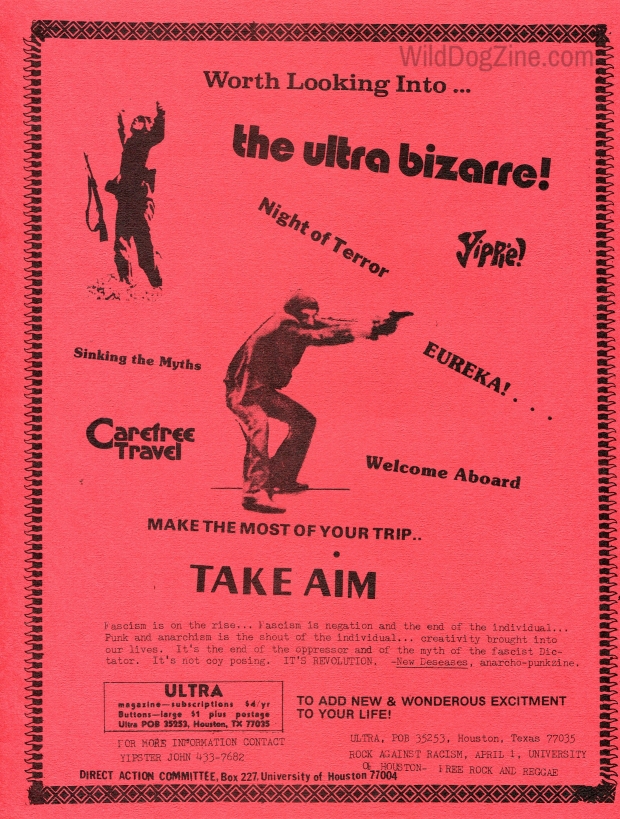